Recently, I’ve been itching to play some of the newer PC games coming out (or recently released), but my laptop was lacking the power to do so. I’ve always been into PC games, but I drift in and out. This year, I decided I would get back into playing again. So, I built myself a “Black Friday-Christmas-New Years” gift: a gaming PC!

Here are the parts in all their glory! 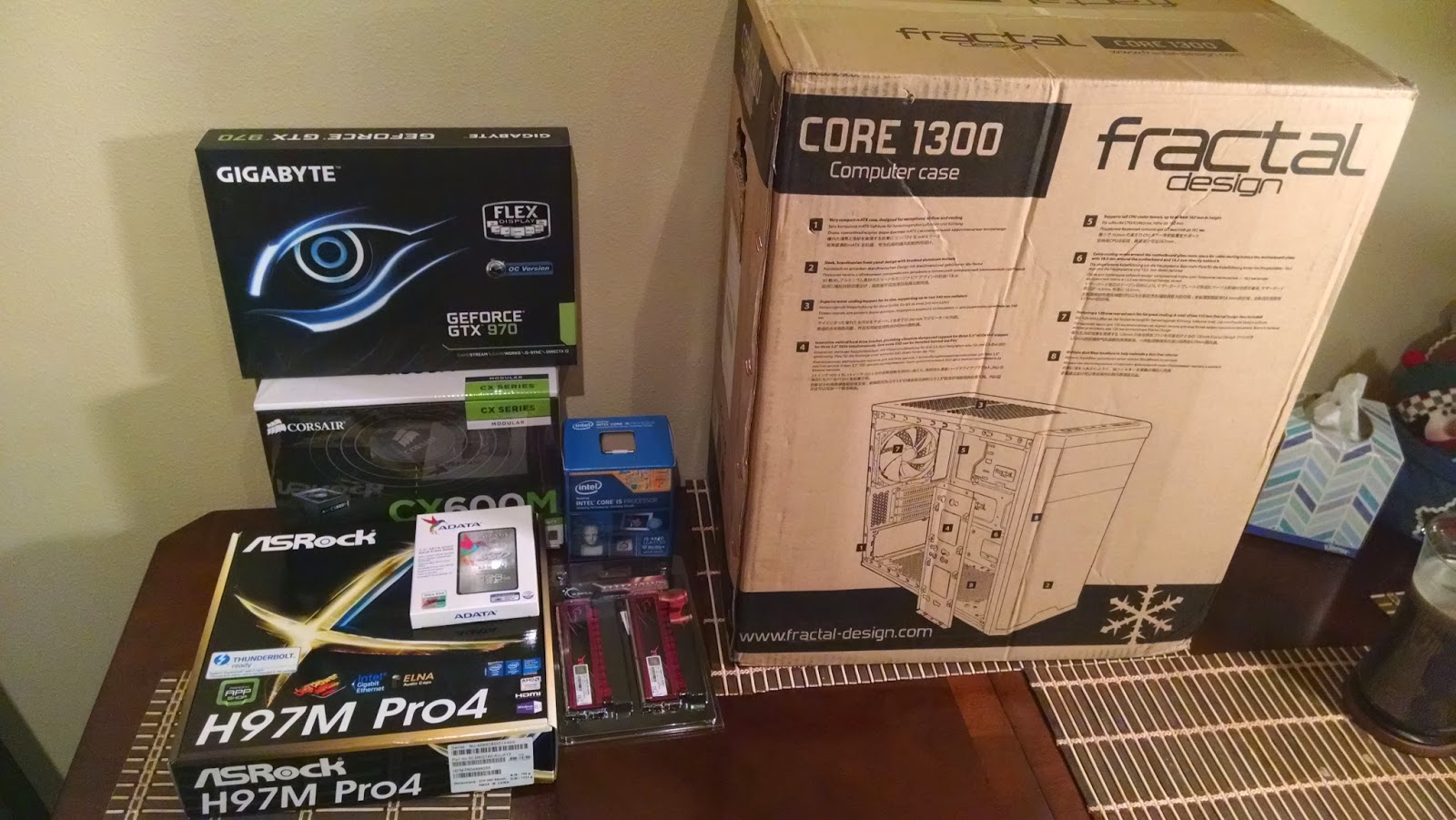 And the build details:

I opted for micro-ATX because I wanted a smaller footprint, but enough airflow to keep my components cool. Mini-ITX seemed too cramped and ATX was too large. I don’t see myself overclocking and liquid-cooling any time soon, but with this case, I’ll have the option if I decide to later. However, I’ve pretty much ruled out SLI/Crossfire, as micro-ATX motherboards don’t support it. The Fractal Core 1300 has solid construction with very good-quality material. It comes with two 120mm case fans that run almost completely silent. 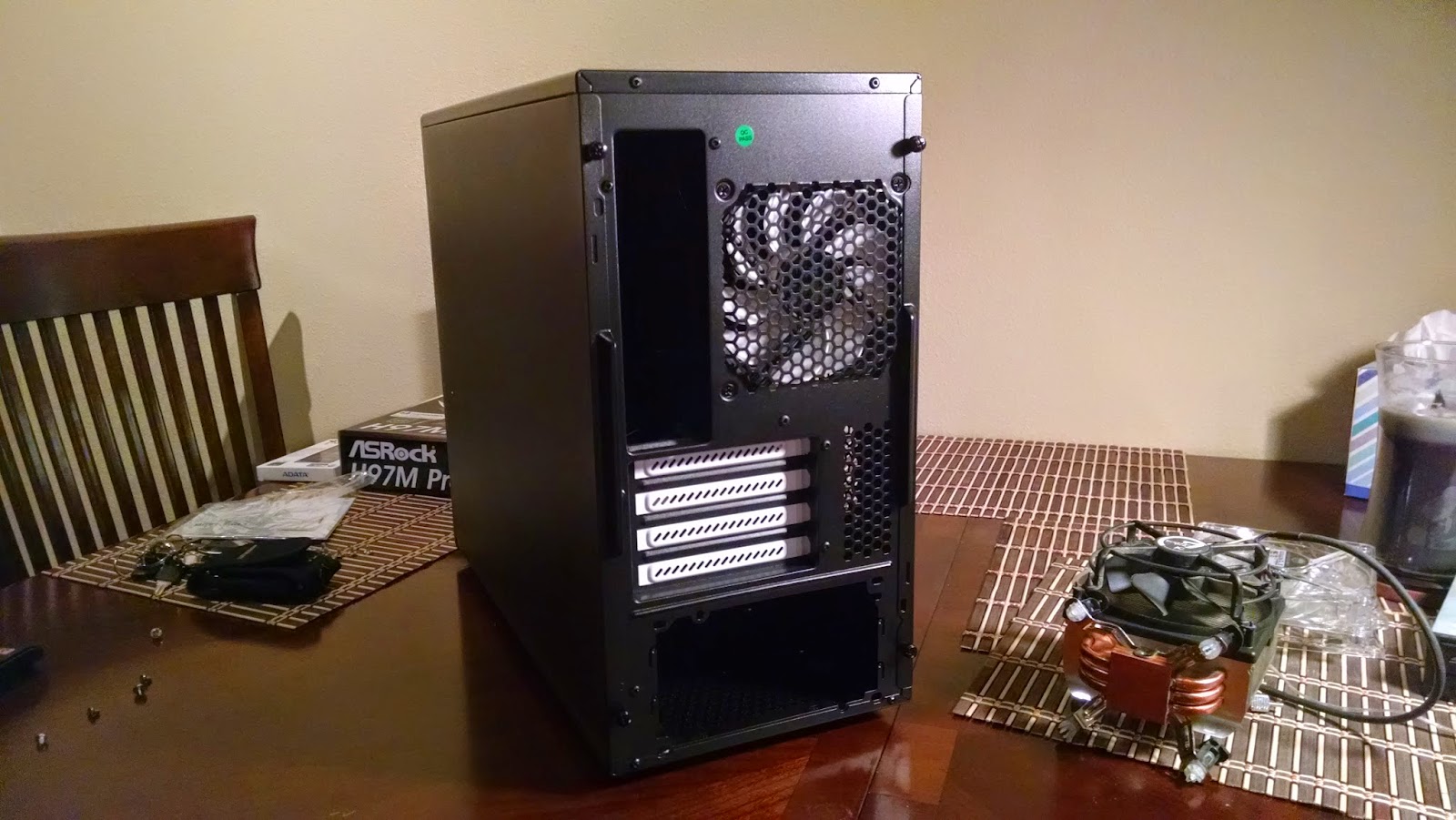 I decided to remove the mount that holds additional SSDs and HDDs in the lower-front part of the case. There are places to mount the SSD on the upper-front mount or back behind the motherboard. So, there was no need for it to stay. 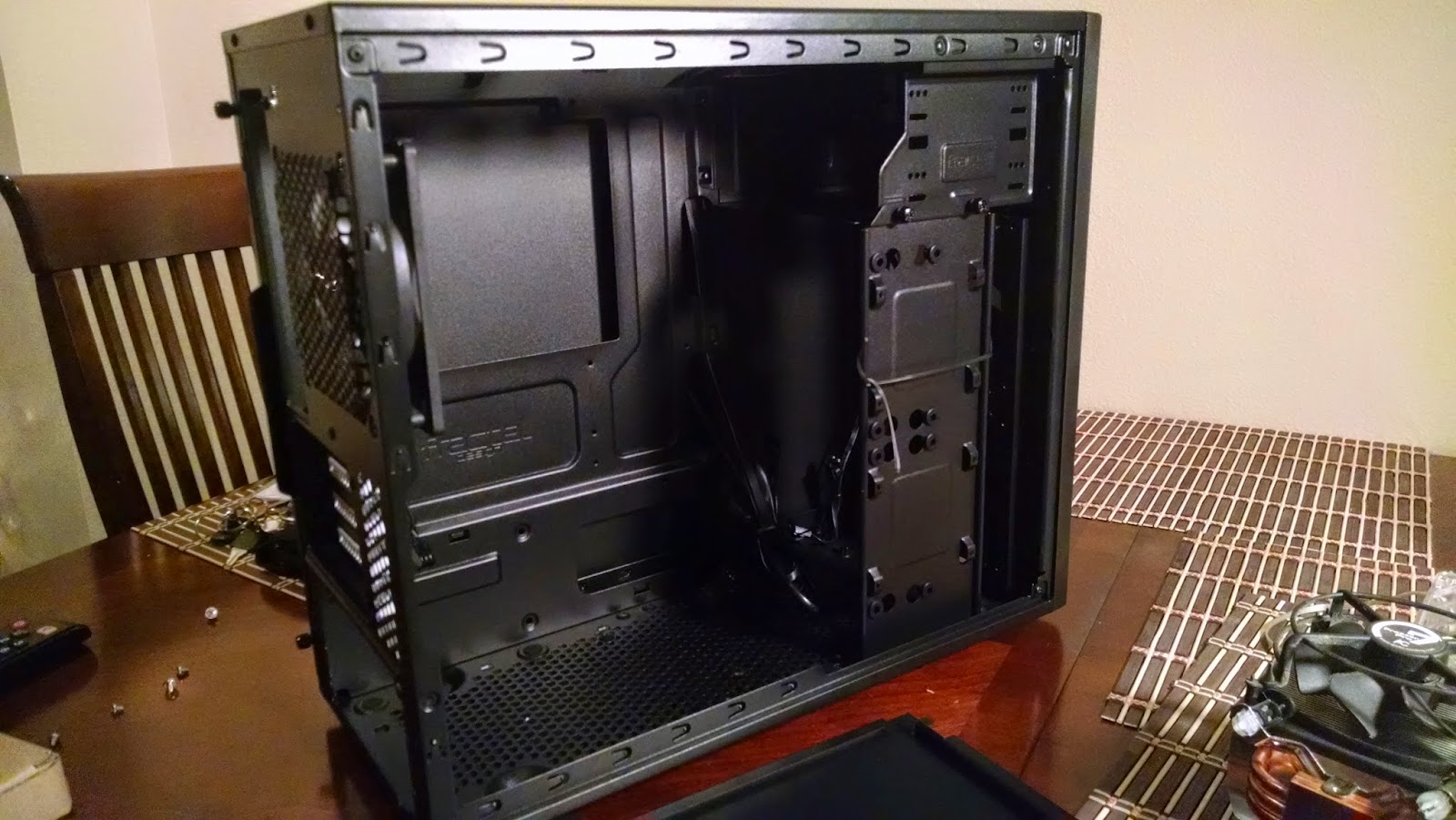 I found these two Reddit articles especially helpful for choosing a case:

The ASRock PRO4 was the cheapest H97 motherboard available at the time. I went with the H97 chipset because I have no immediate plans to overclock. Not to mention, the blue heatsinks look awesome! 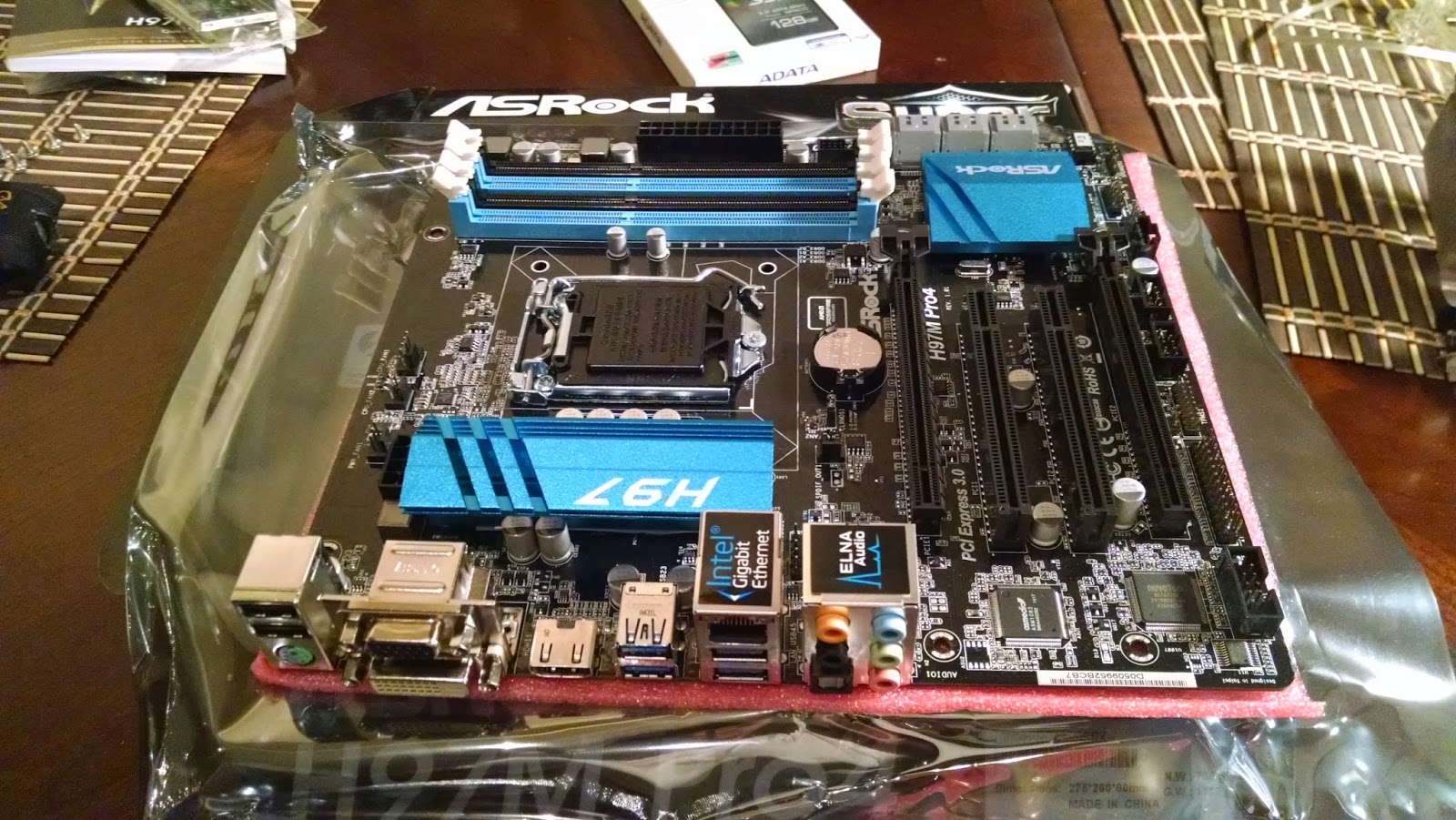 Getting ready to seat the CPU! 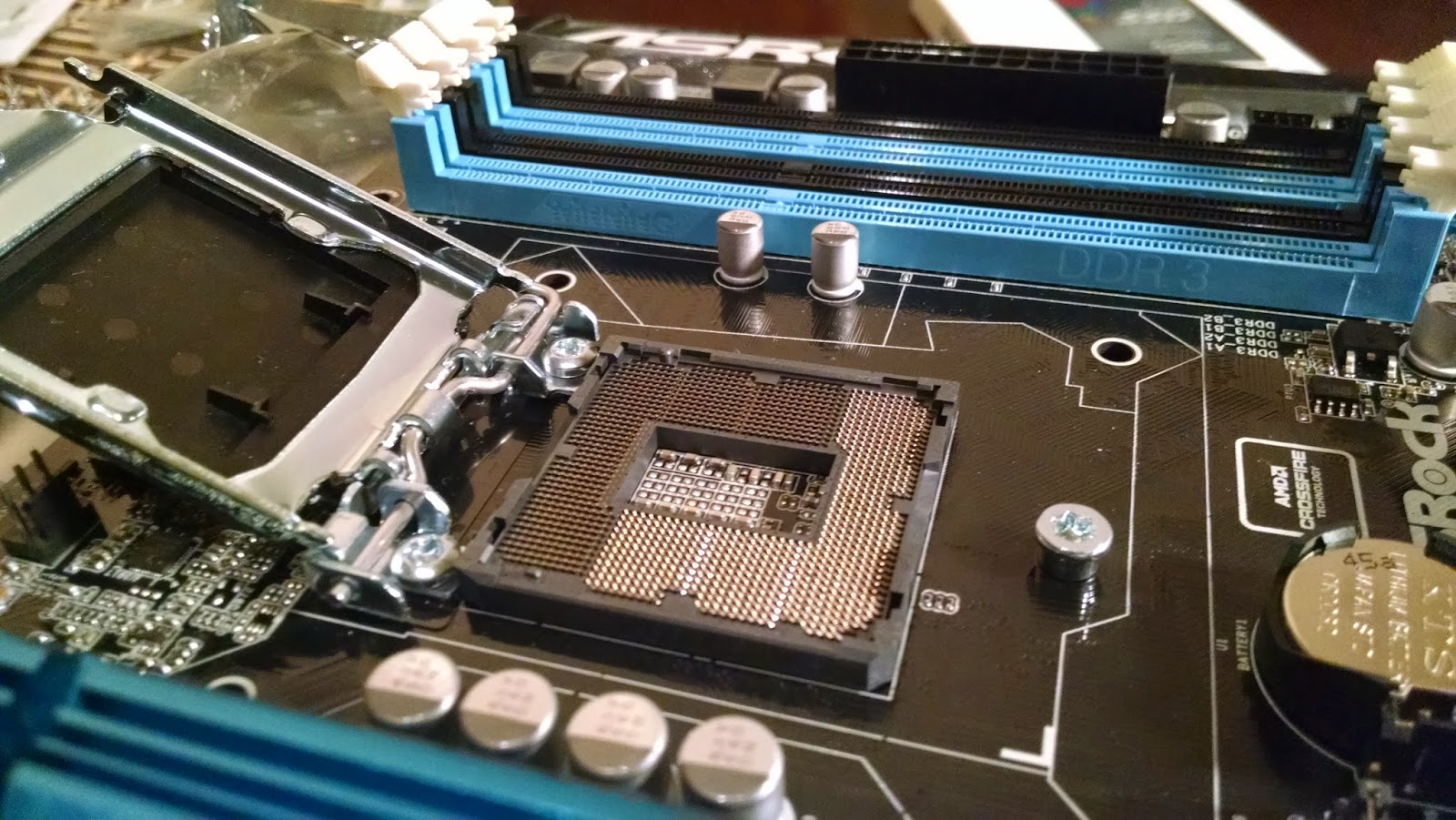 I found these Puget Systems articles helpful in choosing the right Intel chipset:

I spent a lot of time deciding which CPU to buy. My use-cases were pretty standard: gaming, multitasking, web-browsing, and music-streaming. In the end, I ended up going with the “true” four-core Intel i5-4440. 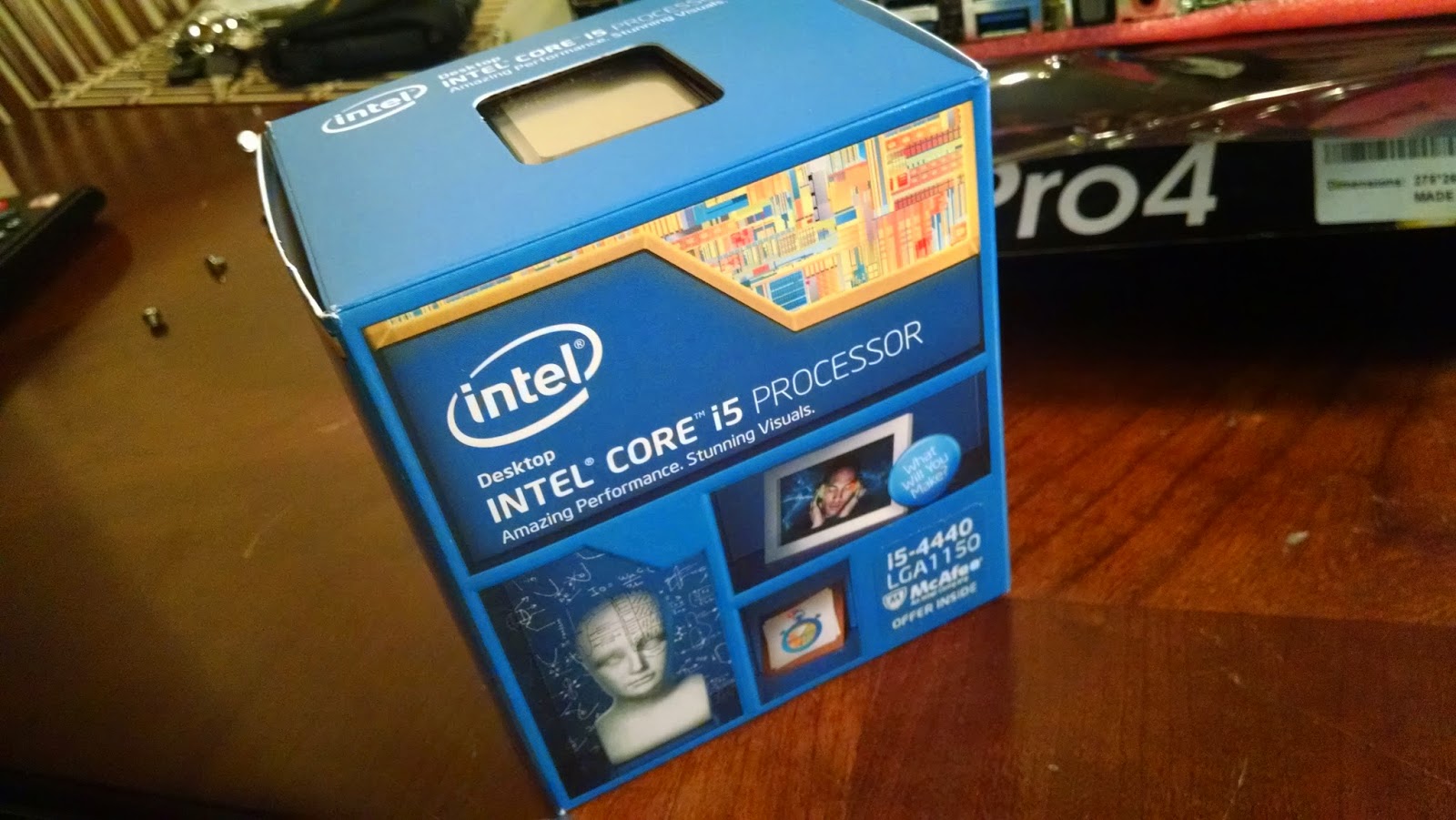 The i7 just seems too overkill for gaming, it’s much better suited for video-encoding or extreme photo-manipulation. If I were on a tighter budget, I’d probably go with an i3. It’s only dual-core, but Hyper-Threading allows it to run more threads. So, games that require four cores (Far Cry 4), would run on an i3. If I were only worried about handling games at mid to low settings on an extremely low budget, I’d probably opt for the Pentium G3258 and overclock it. An overclock G3258 can perform pretty admirably with newer games! 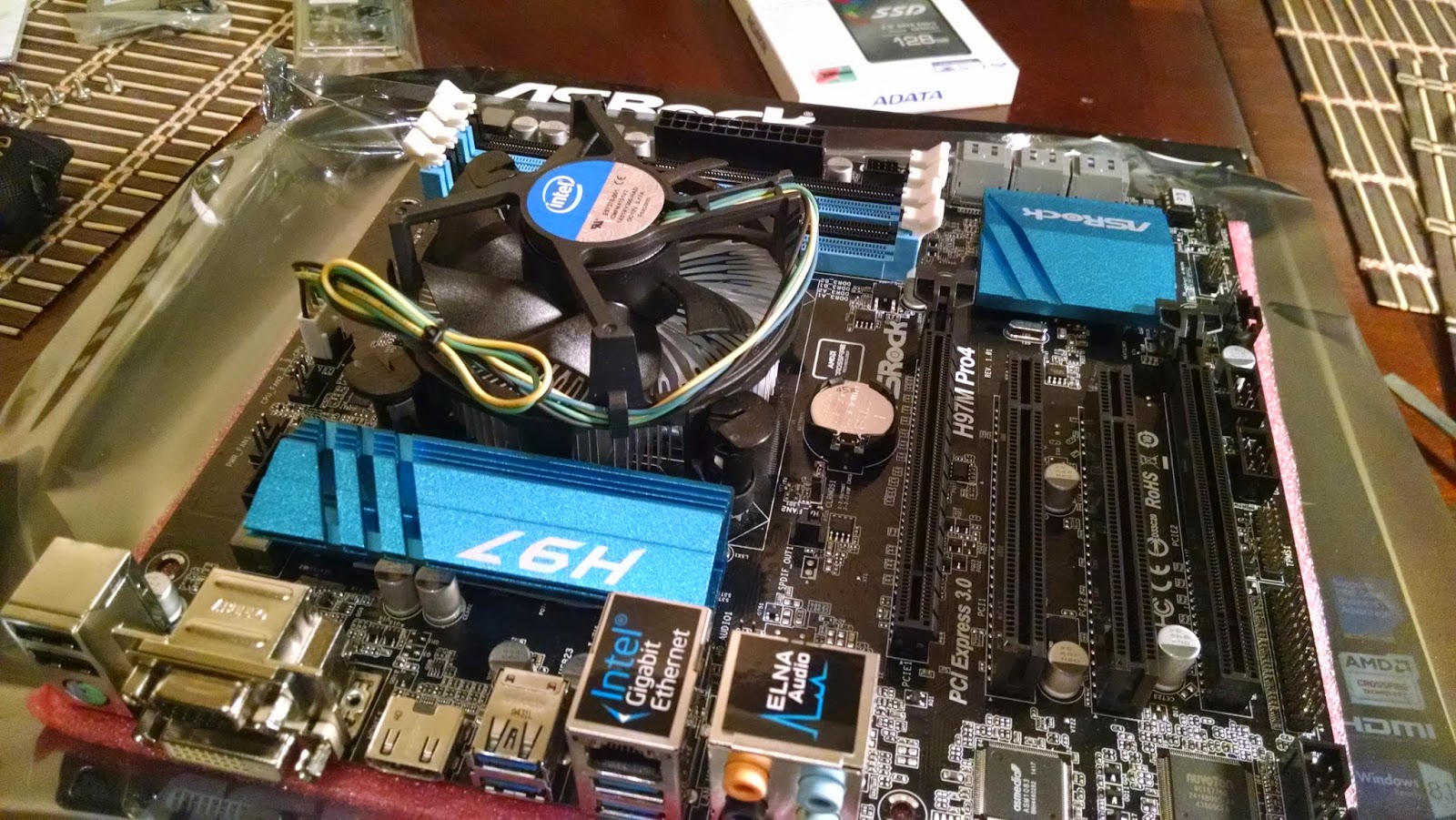 The i5 was the best choice for my needs, and my wallet isn’t burning!

I found these tools helpful for selecting a decent CPU:

I try not to overthink memory. It’s memory. I used Ripjaws in my last build, so I used them again. 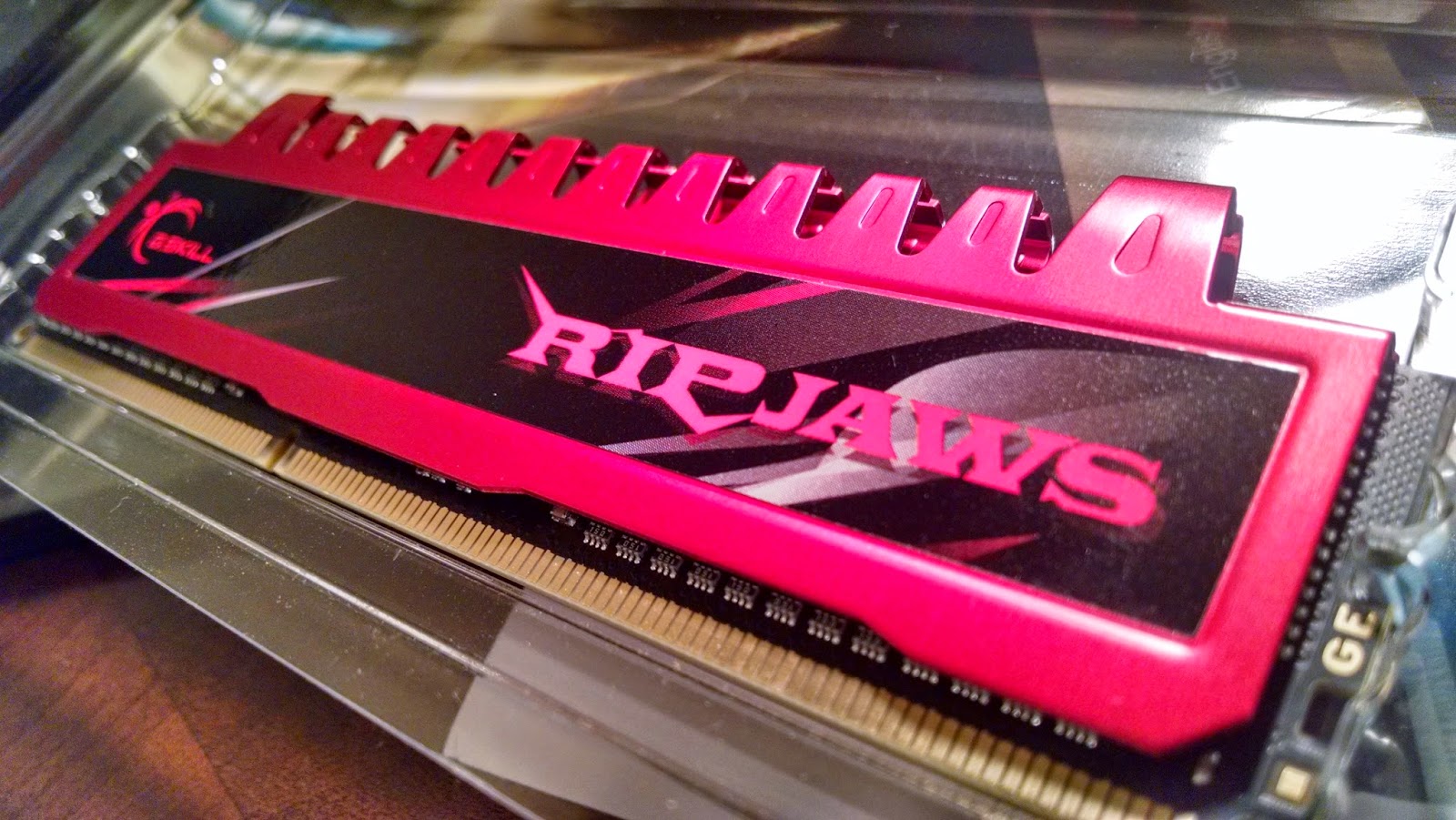 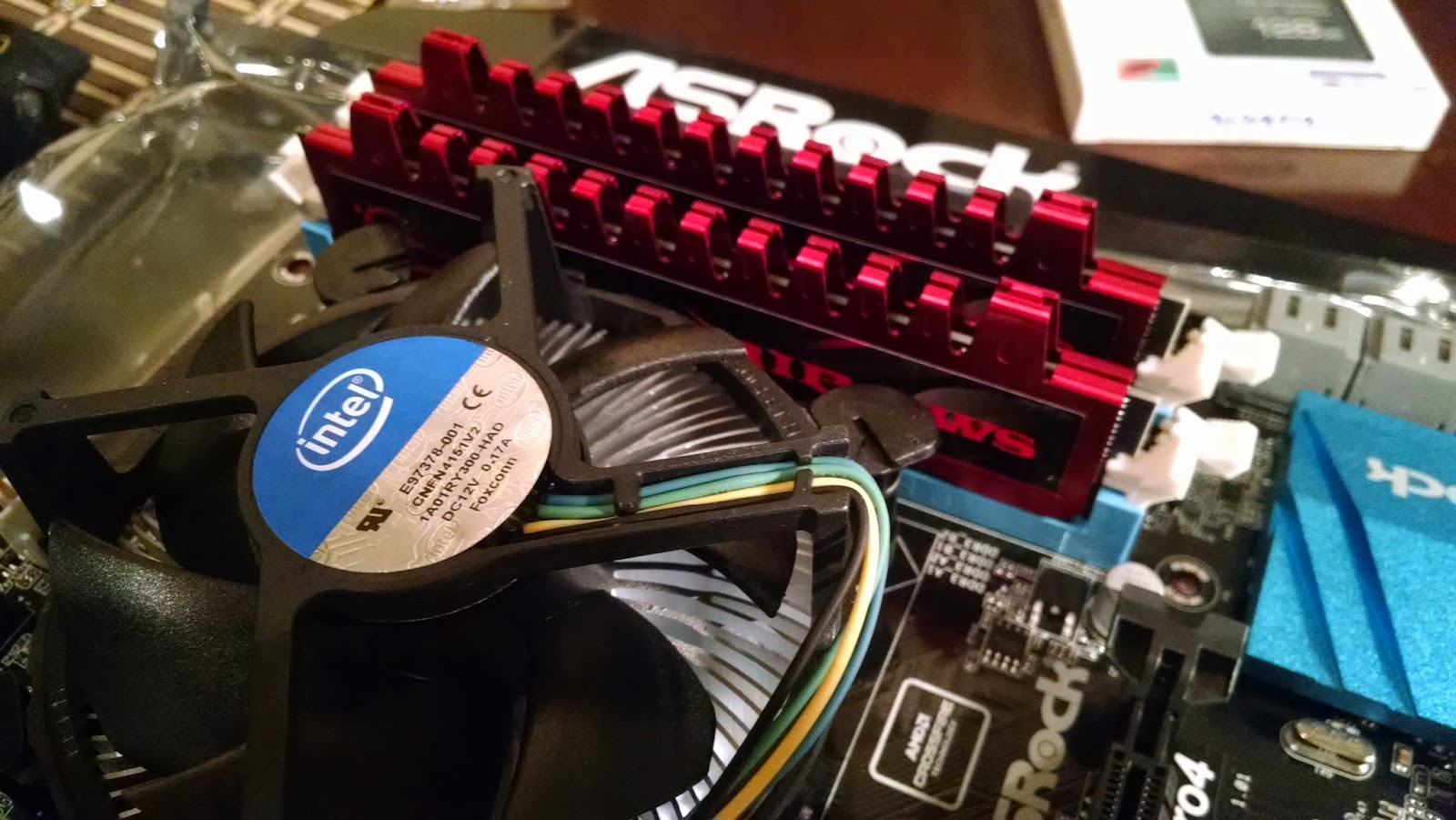 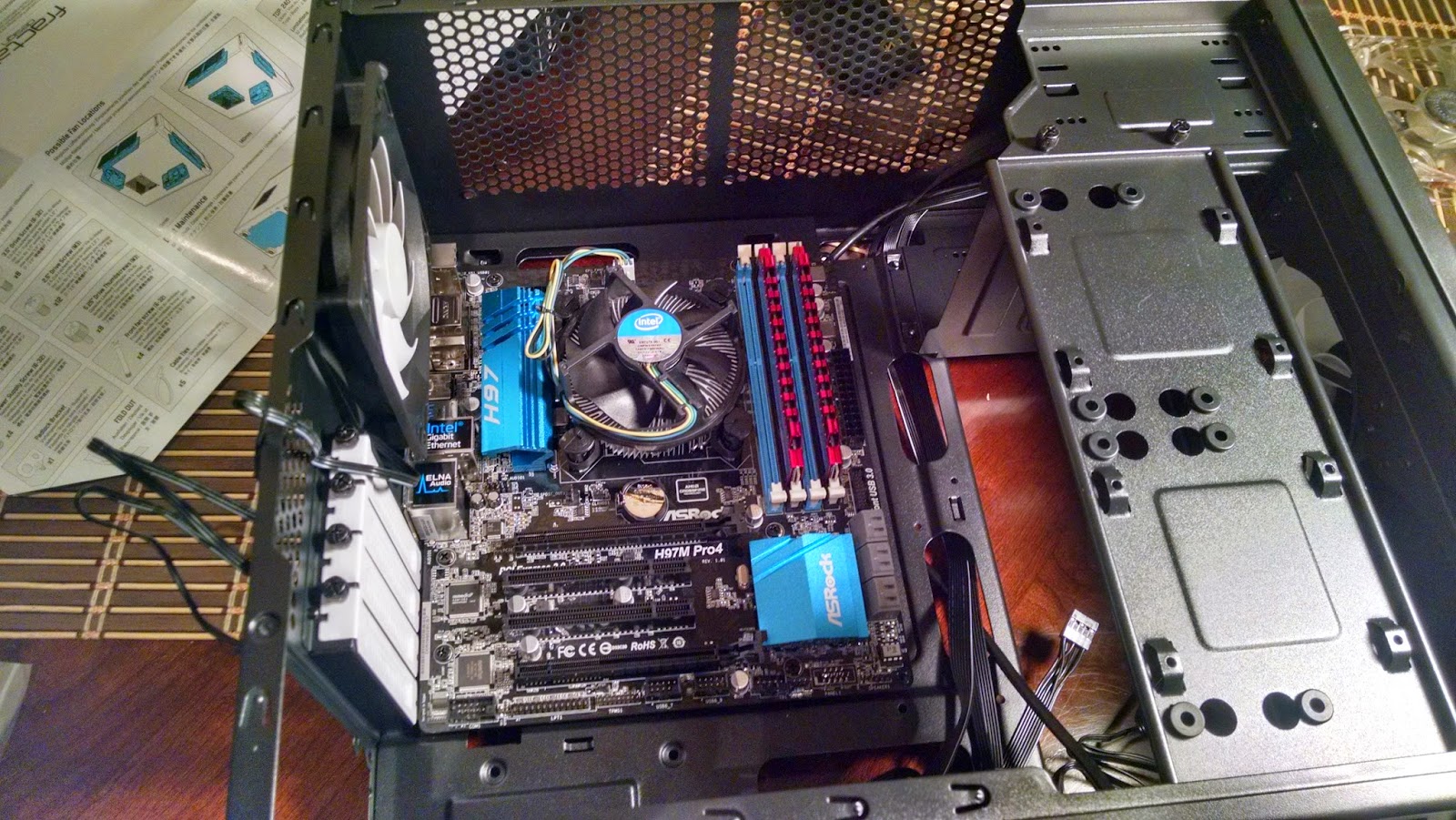 For the i5 and GTX 970, the 600W Corsair CS600M is more than enough to power the entire rig. I generally look for semi-modular, 80-Plus-rated power supplies with a single 12V rail. Corsair has had a great reputation for stable power supplies in the past. Hopefully, this one holds up! 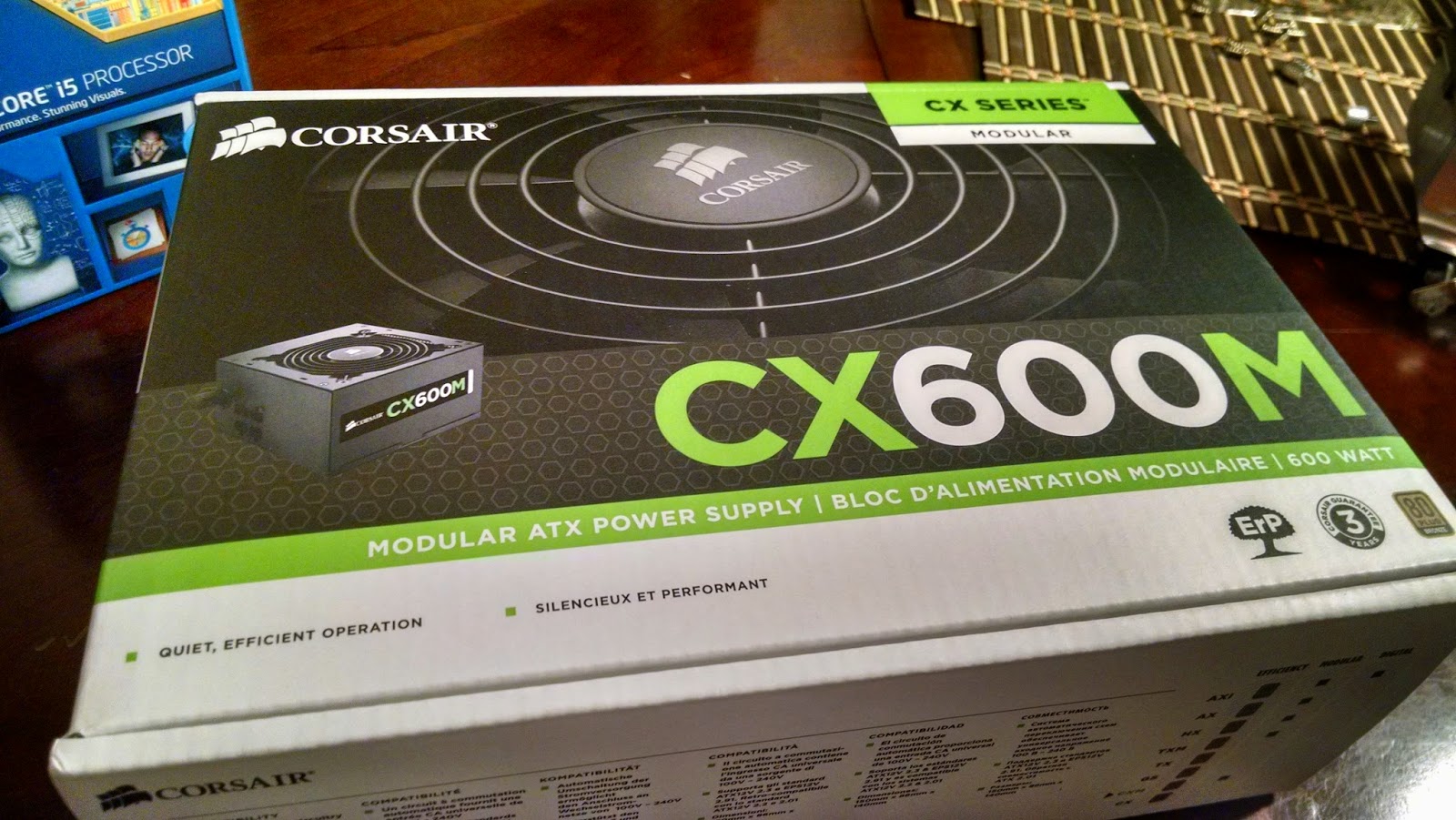 In my last build, I used a modular power supply. Once you go modular, it’s really hard to go with anything else! 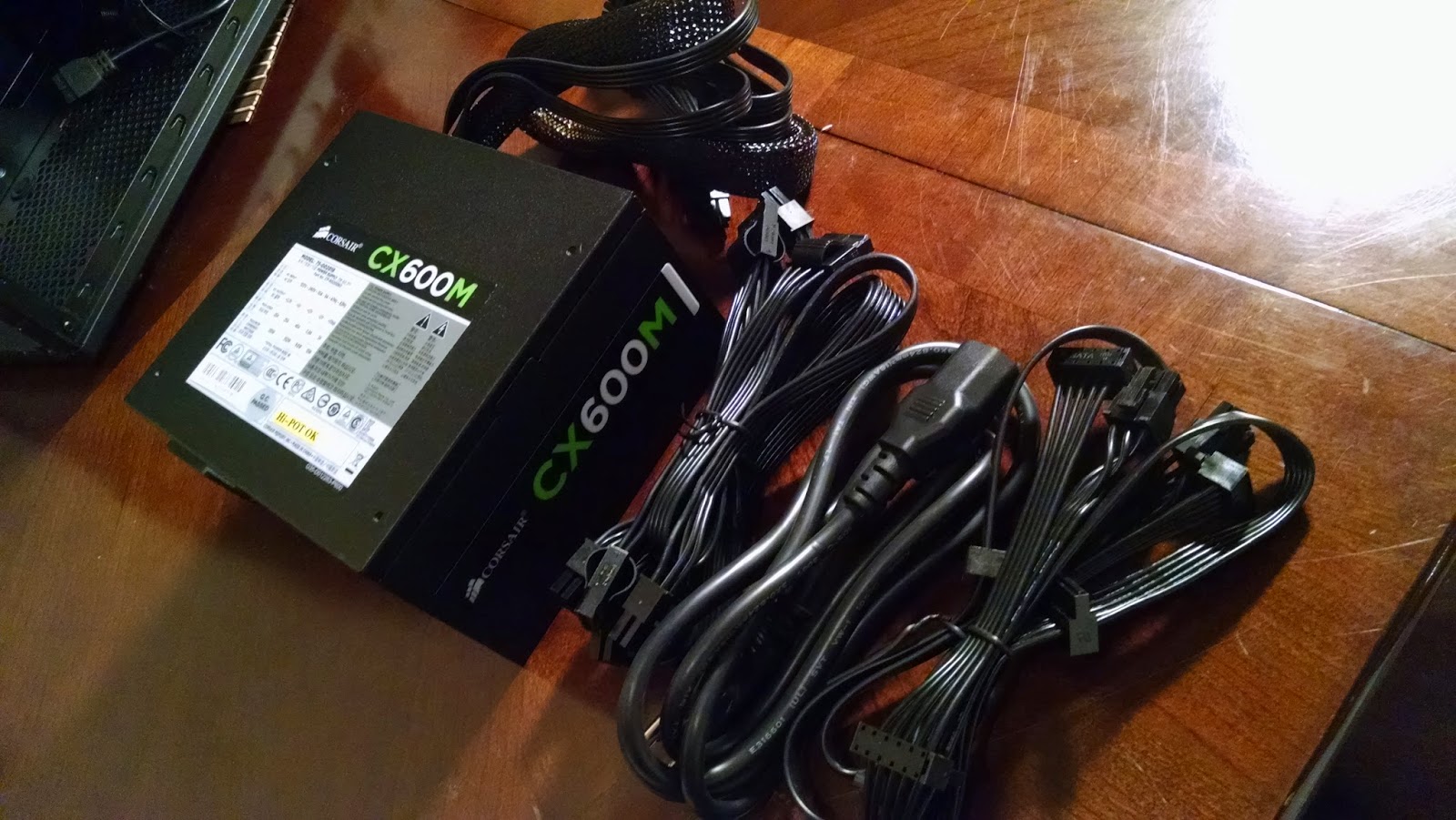 I have an 1TB external hard drive holding all of my media, so I really only needed disk-space for Windows 8.1 and my games. So, I opted for one 128 GB SSD. This ADATA one was the cheapest at the time, which made the decision easy. 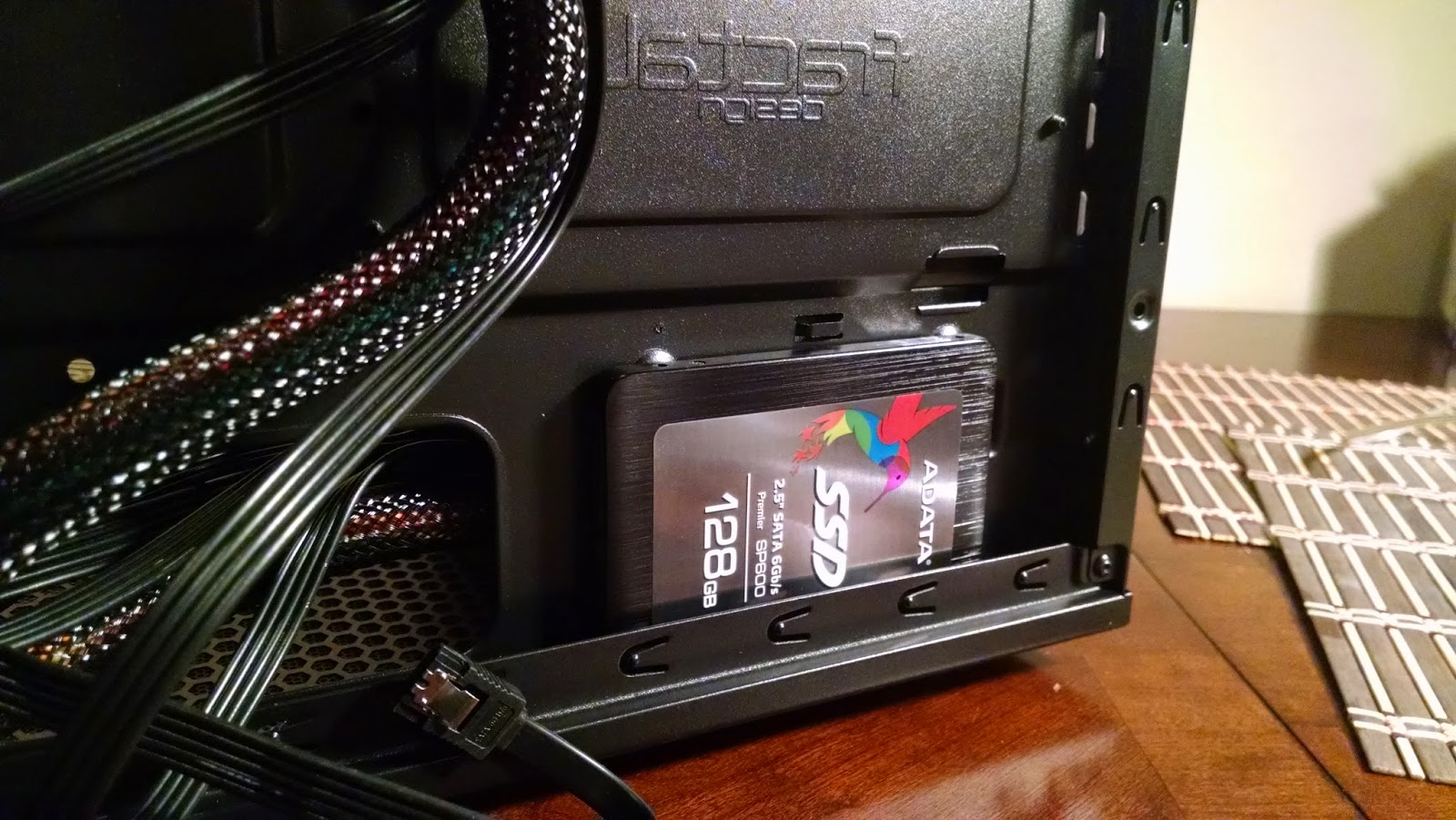 I mounted it behind the motherboard and power supply, down below. It was quite snug, and it was pretty tricky getting the SATA cables back there, but I managed to cram everything into place! 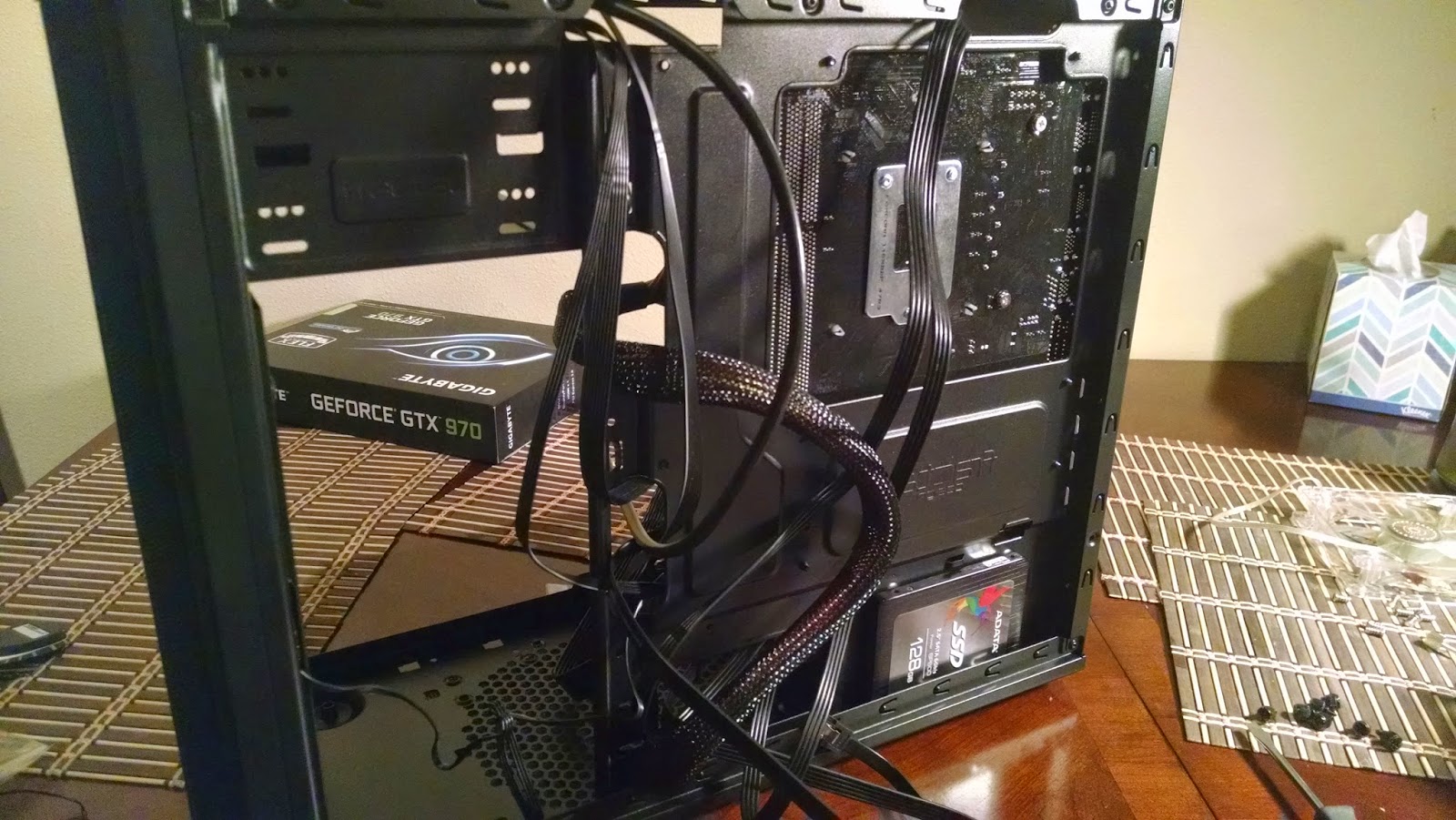 I spent a good amount of time deciding which graphics card to buy. In my previous build, I went with an AMD/ATI 5850 to save some cash, and still got decent performance. However, it ran fairly hot, very loud, and took a lot of power. This time around, I spent more money and splurged on this Gigabyte GTX 970. At this time, it runs every game I throw at it on “ultra” settings. It runs smooth, cool, and doesn’t suck much power. 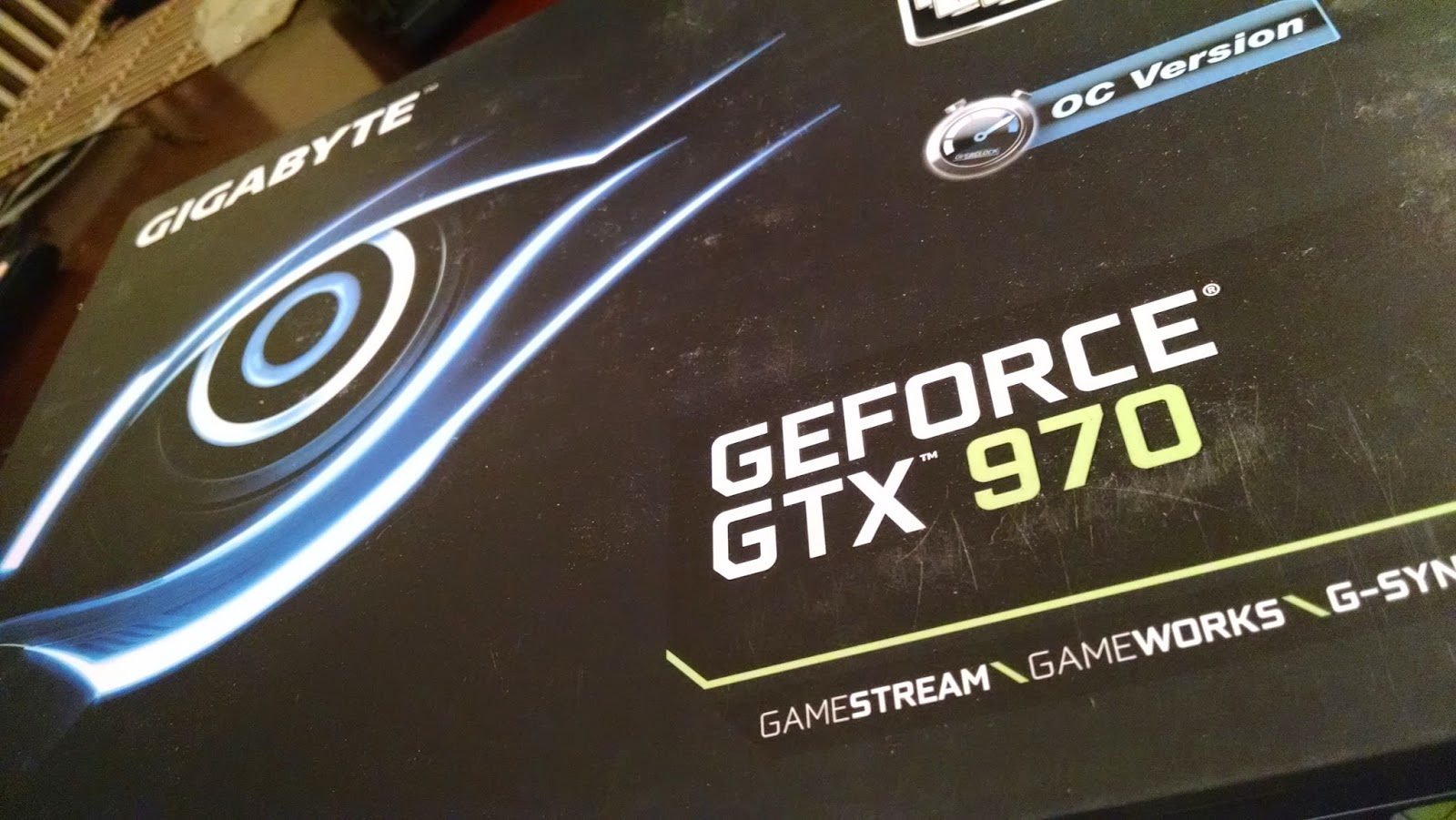 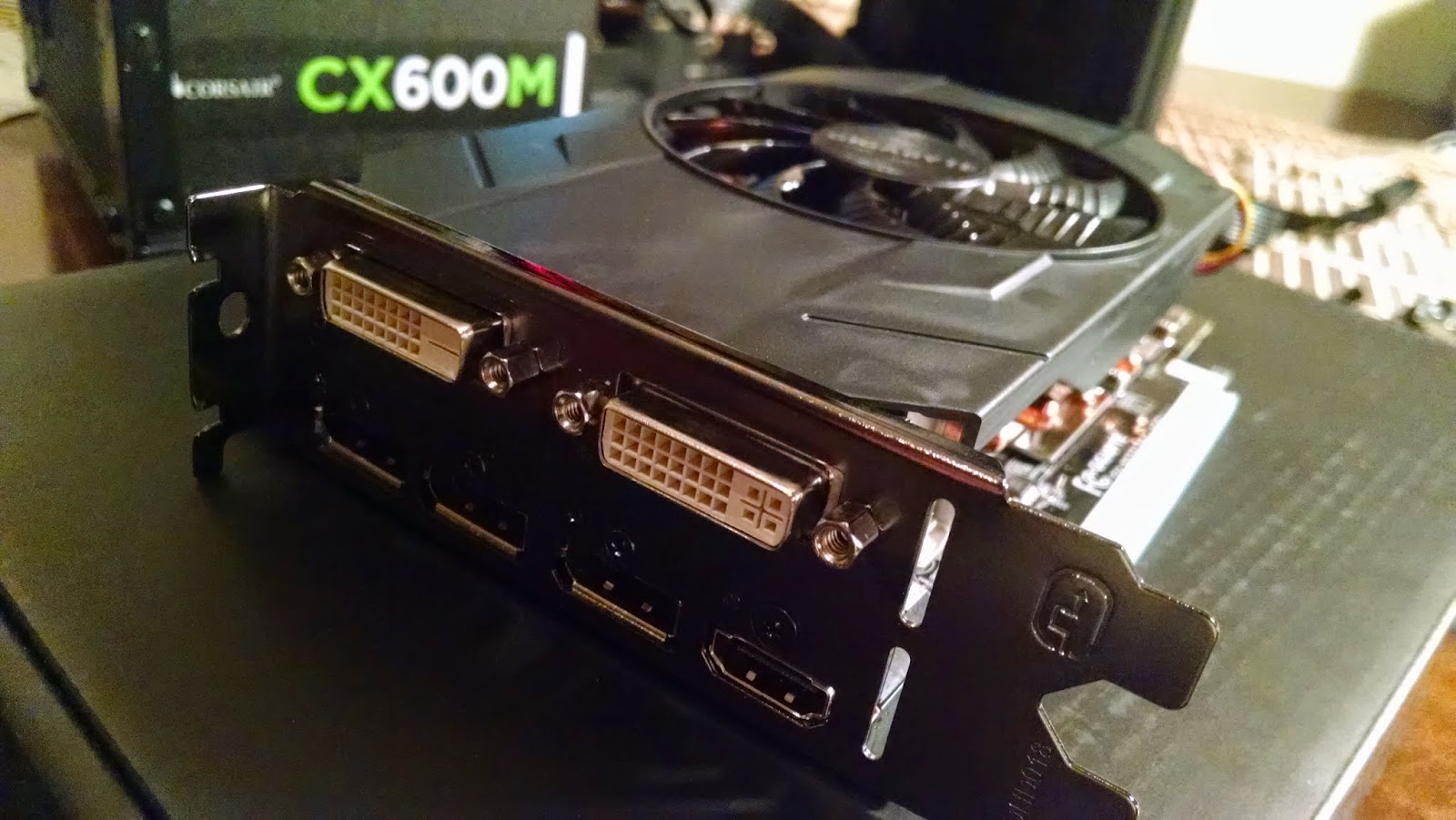 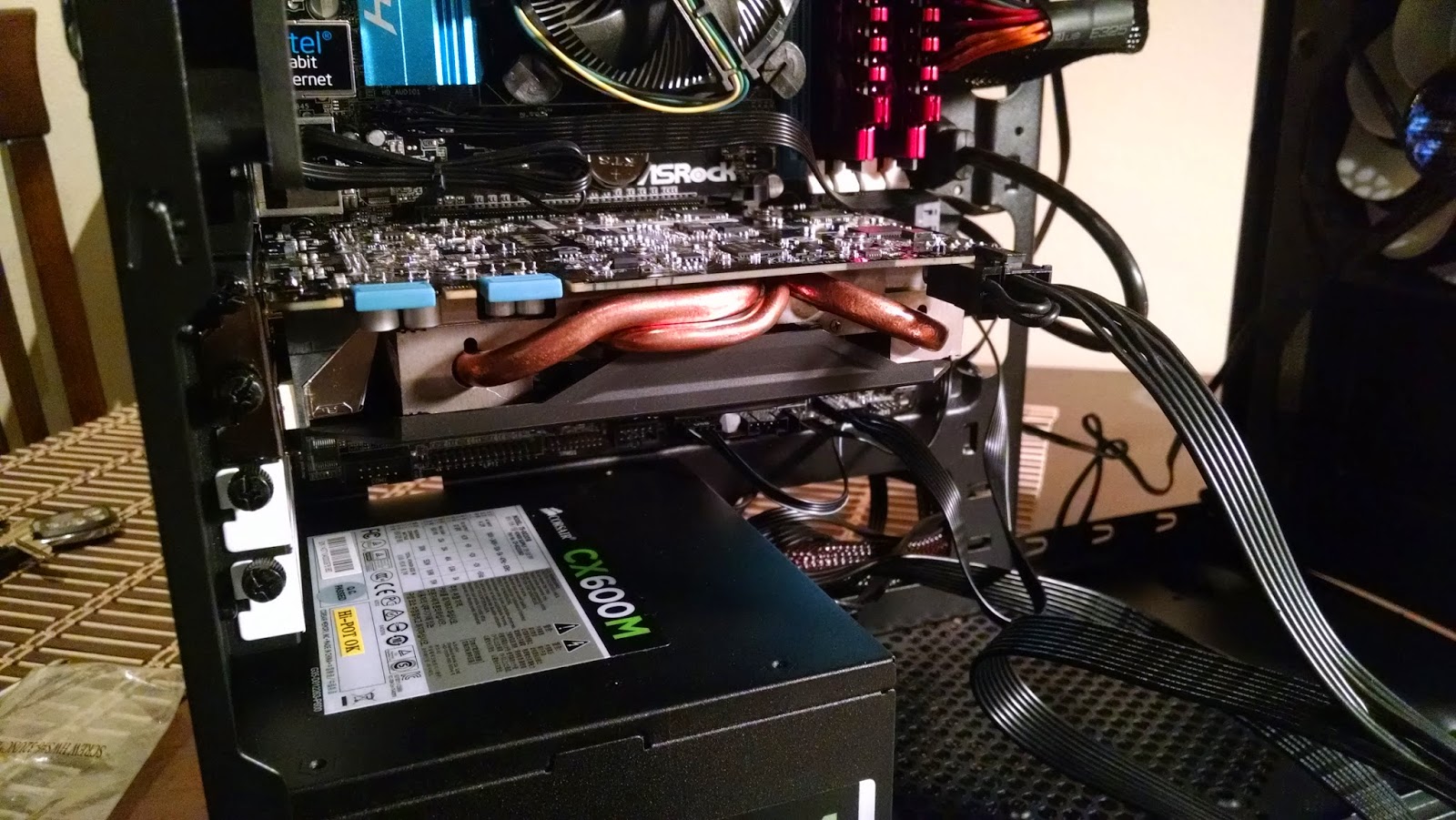 Another minor reason for going with Nvidia was Linux driver support. I do some software development on the side and spend time in Ubuntu frequently.

I found these tools helpful for selecting a decent graphics card:

Took a bit of time to figure out how I wanted to route my cables. The key to a cool (and cool-looking) PC is how the cables are managed. 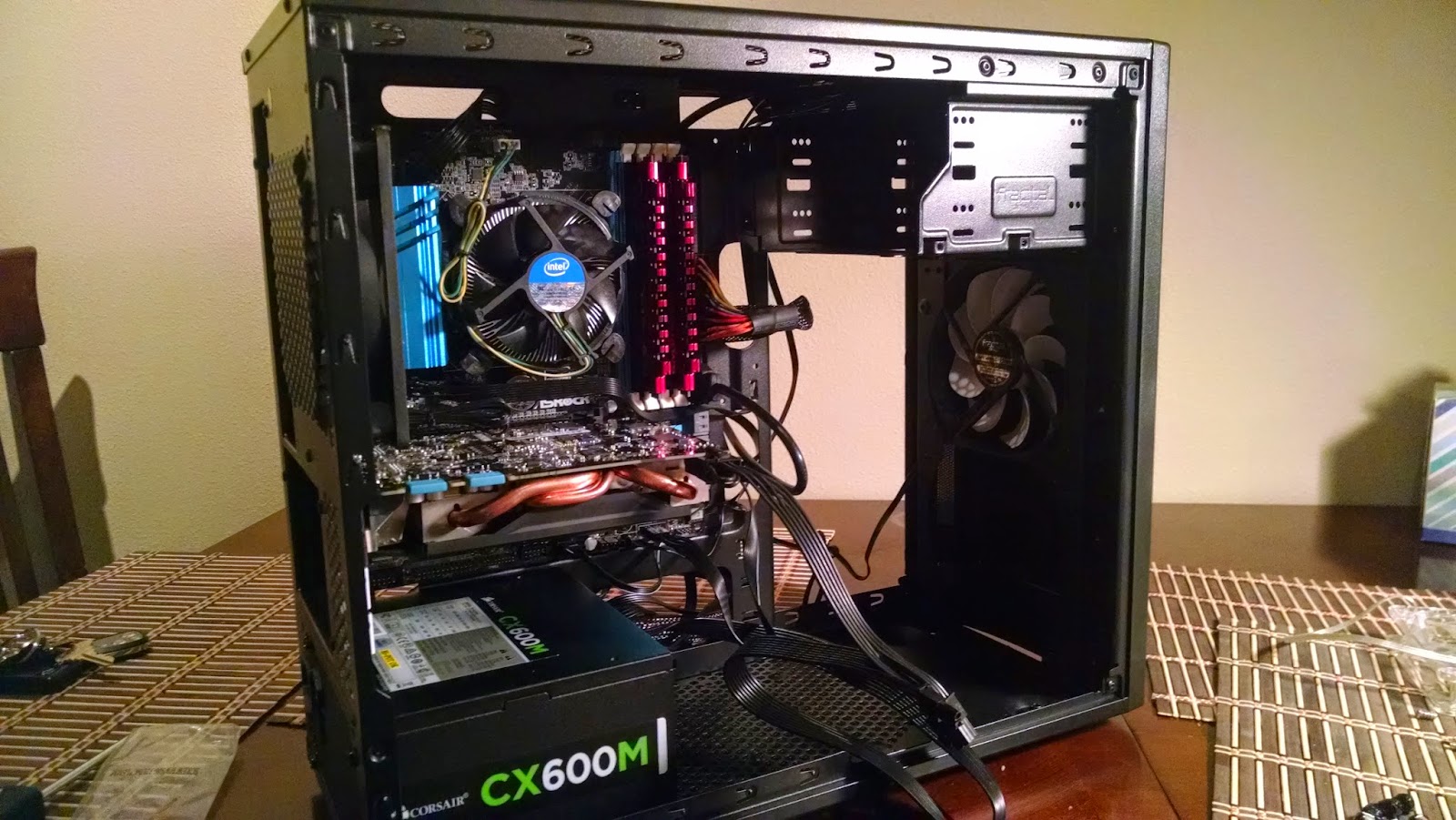 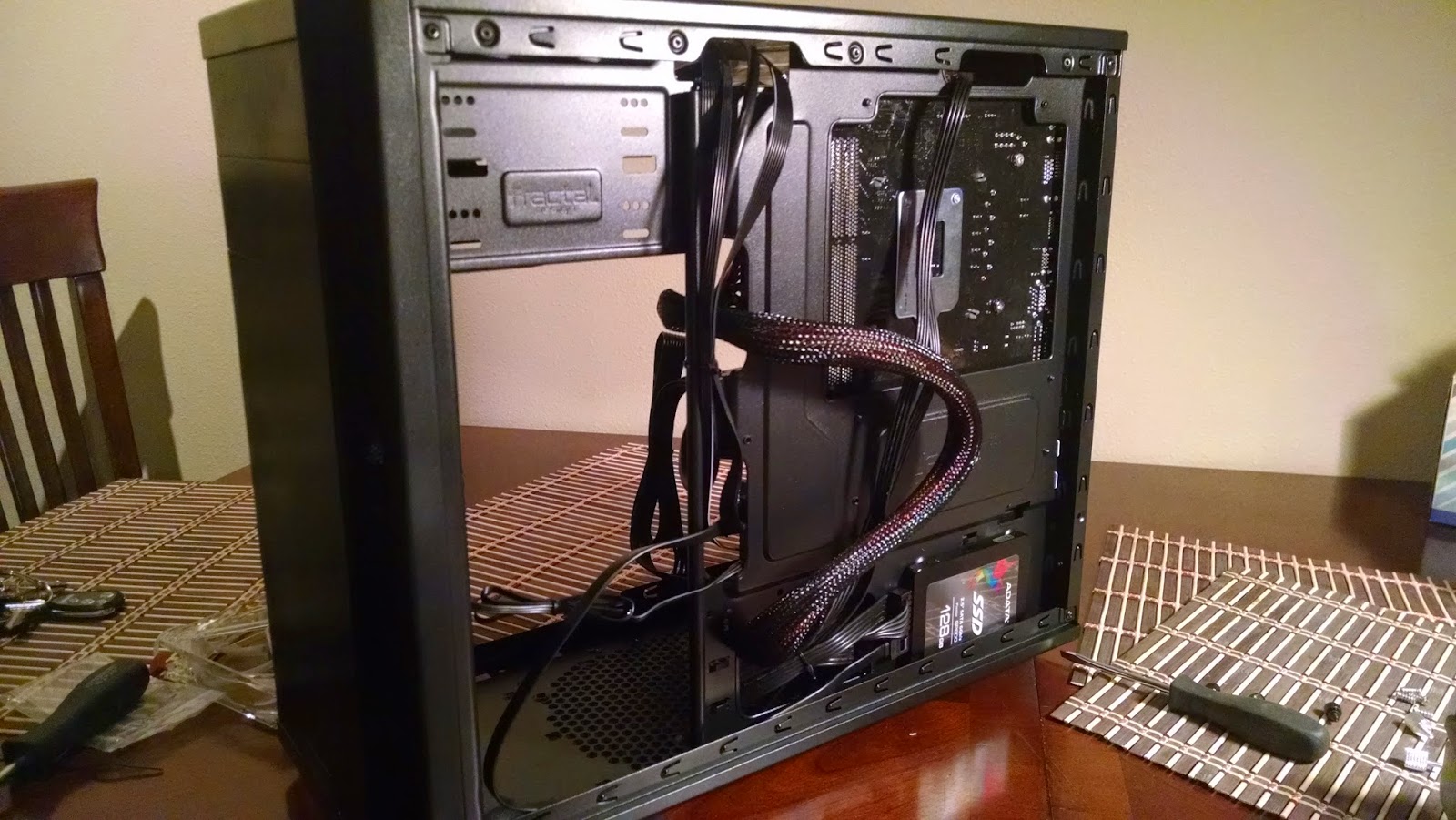 I decided to finally settle on something simple. I was in a hurry to turn the thing on for the first time! 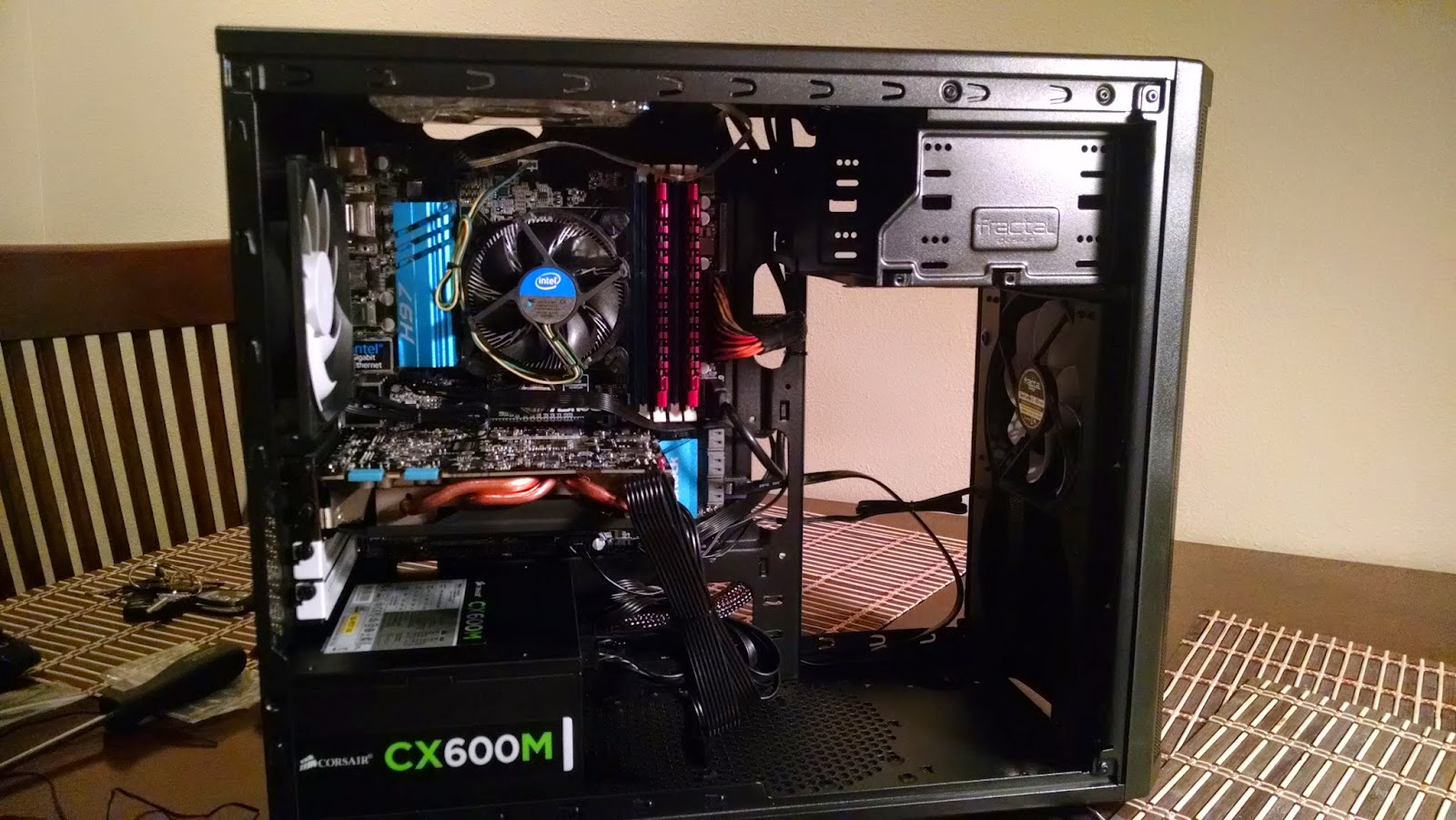 Once everything was hooked up, I plugged it in and turned it on. It started up without a hitch! 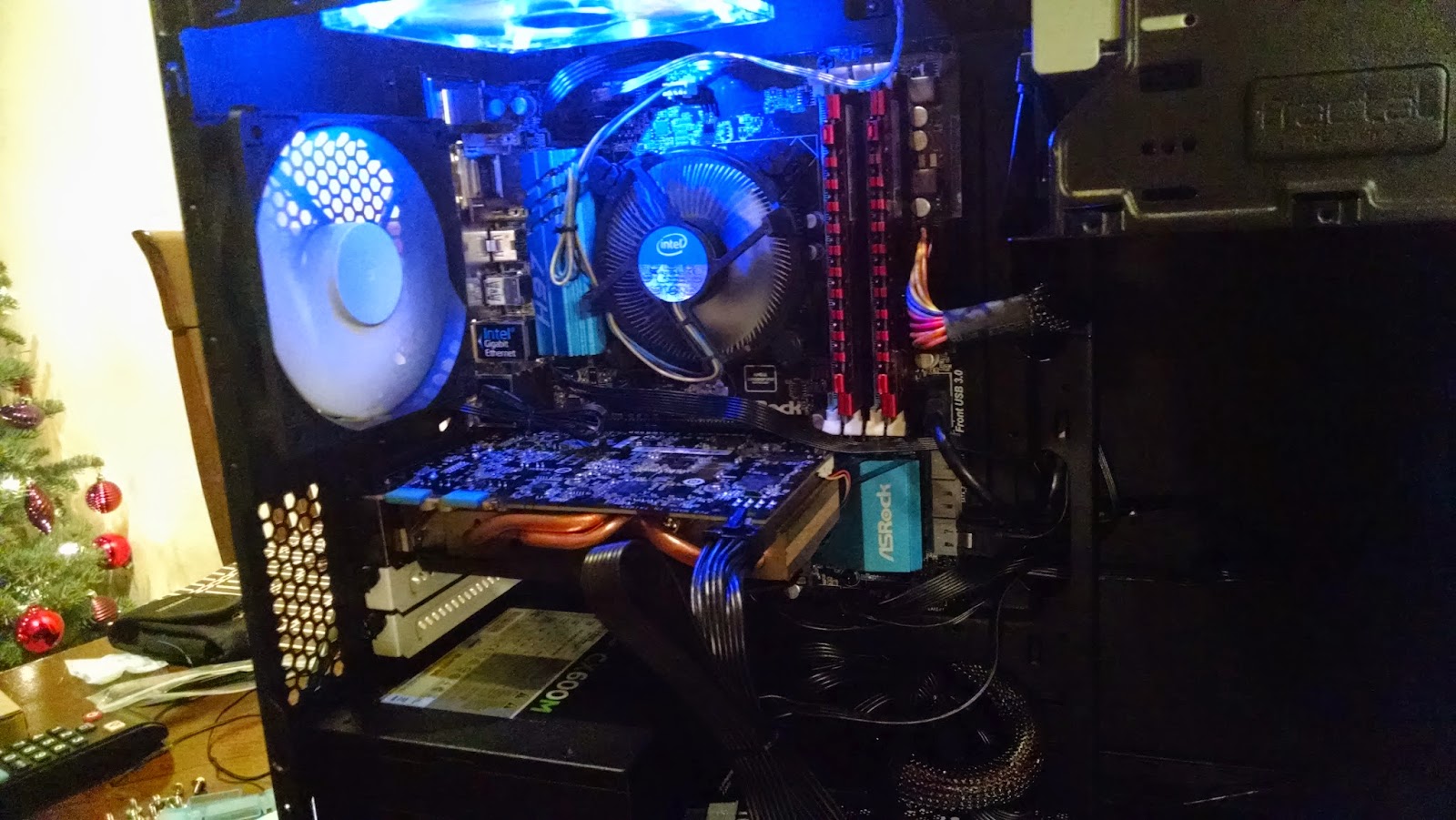 I really like blue, so I pulled some old blue-LED fans from my old build and threw them in. It’s a little corny, but I don’t mind it. 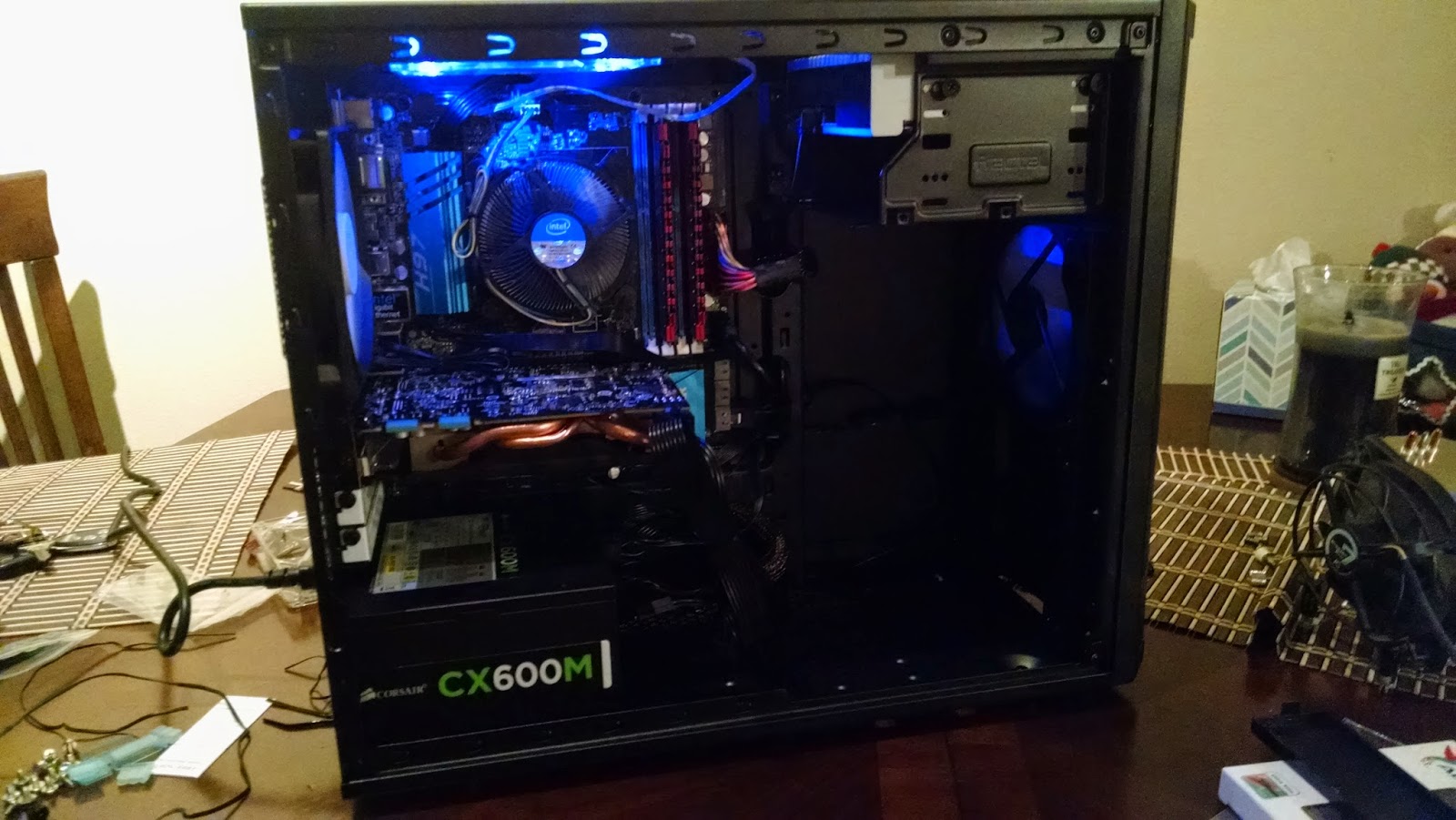 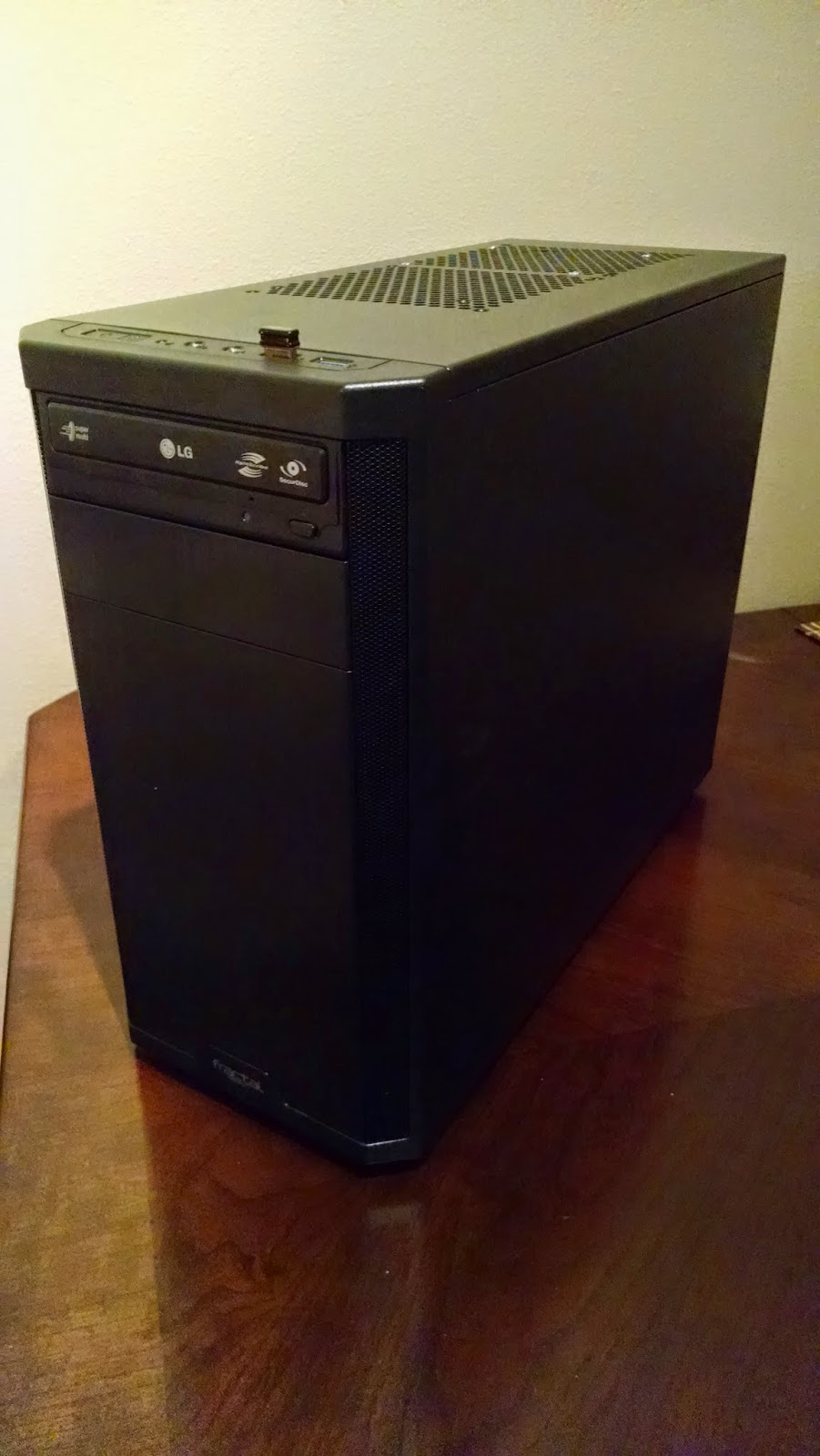 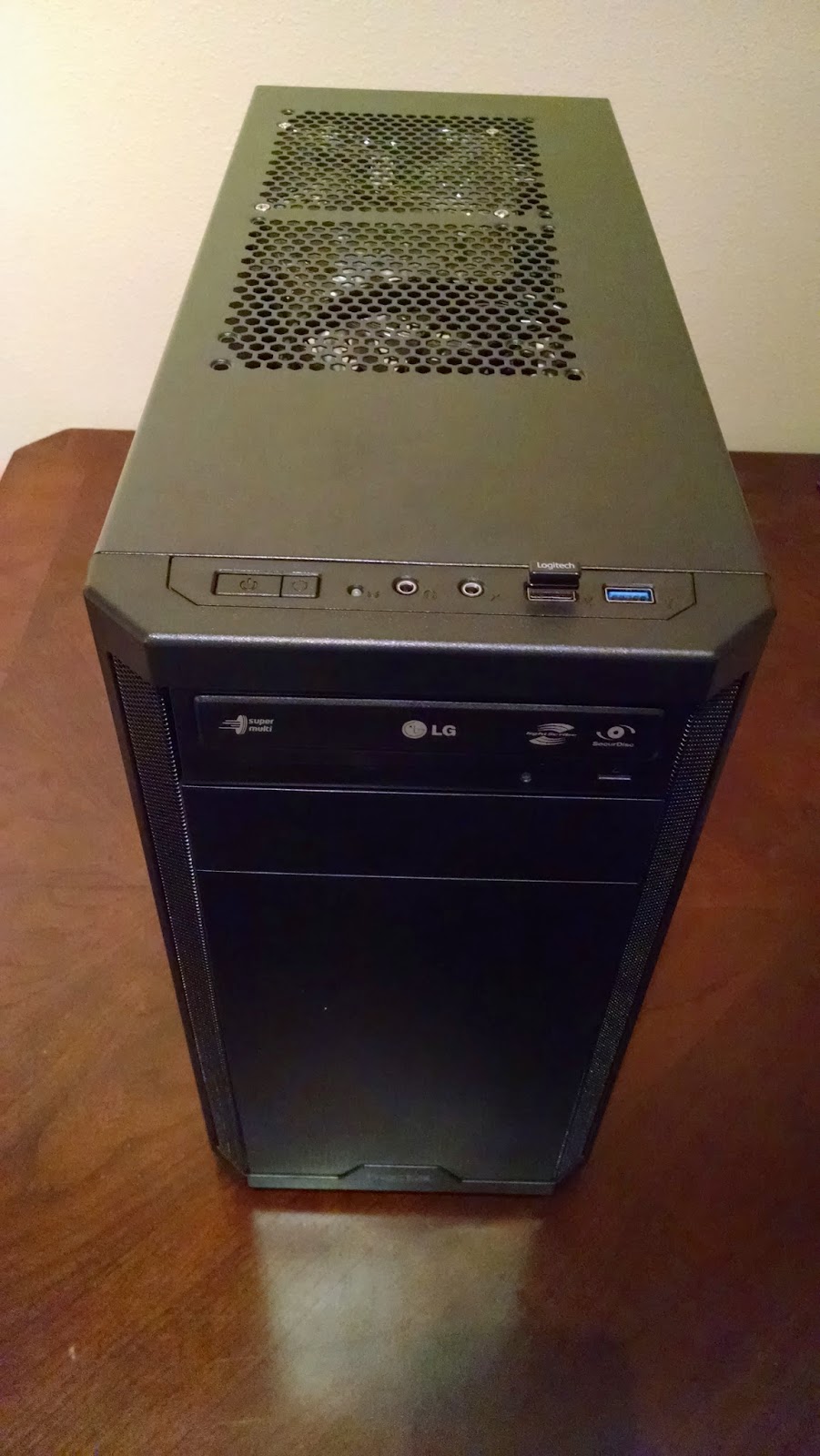 The PC looks really sleek sitting on my desk. It runs exceptionally quiet, even under load! 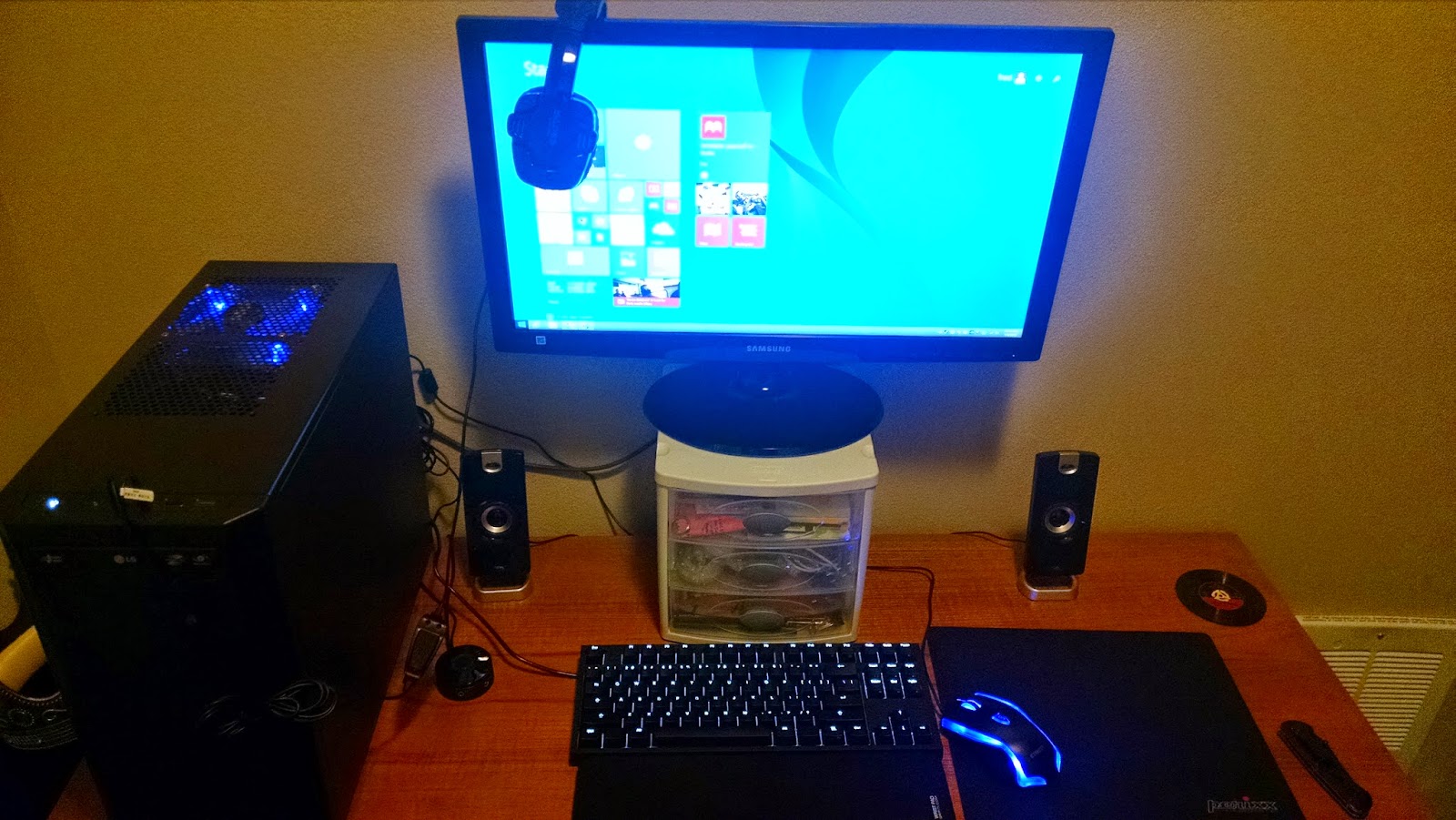 The Story: A PC Builder from the Start

I’ve always been interested in building/modding PCs. From a very young age, I was exposed to the ins and outs of computers. My dad studied and worked in IT during the early 90s, arguably the boom of the PC age. We were one of the very few households in the neighborhood with a PC sitting in the living room at this time. My dad built computers for my family from surplus parts at work and trips to Computer Sonic, one of the few local computer stores I can remember at the time.

As a kid, I fell in love with PC games. I remember playing (or watching my dad play) Oregon Trail, Doom, Warcraft, SimCity 2000, etc. I enjoyed other, less popular games like Jazz Jackrabbit, Gizmos and Gadgets, and Tyrian. As time went on, and I got older, I continued to play games like Age of Empires, Myth, and Starcraft. Inevitably, my love for PC games led to my love for custom-built gaming PCs.

Fast-forward to my freshman year in college. Following in my dad’s footsteps, I landed a job working in IT at my university while studying computer science. I had the opportunity to build entire computer labs from component to workstation. It was here where I learned the importance of each and every PC component and how they work together.

Fast-forward to my junior year (3rd year) in college. I managed to save up money over a couple of years, along with some help from the holidays, and build my very first gaming rig. It was definitely an “extreme budget” build, with an OC’d Intel E5200 paired with a low-end GeForce GPU (don’t remember which one). It worked decently for my word-processing, programming, and CounterStrike needs!

Fast-forward to graduation a couple of years later. After taking a summer off, I landed my first “true” job as an entry-level web developer. At this point, I was making fairly decent money, and also playing more demanding games with the free time. So, I decided to build a decent gaming PC with an Intel i7-860 CPU and paired with an AMD Radeon HD 5850. I managed to play all kinds of games with this baby: CounterStrike Source, L4D, Simcity 4, ANNO Series, etc. Sadly, I began to lose interest in PC games at this point. I ended up selling the PC to some high schoolers.

Once you’ve forayed into the wonderful world of PC gaming and rig-building, it’s impossible to let go. I know I’ll continue to build PCs (for myself and others) and explore new PC games as they come. Can’t wait to see what the future holds!